Control of Alignment During Dynamic Signaling 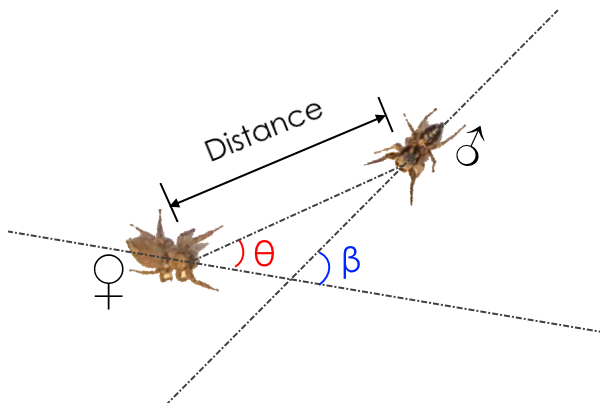 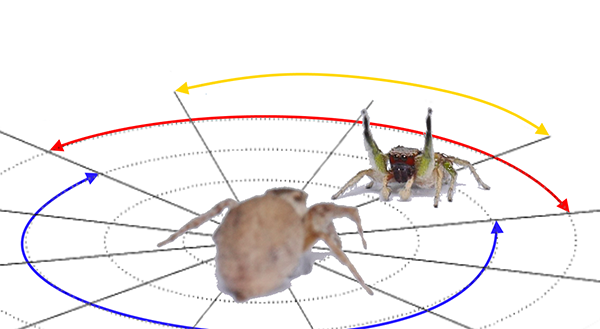 Courtship in H. pyrrithrix is dynamic, with males attempting to capture and retain female attention using movement and color.

Many signals are inherently directional – how well they can be perceived depends on where a viewer is positioned in relation to the signaler. Similarly, the sensory systems of receivers can also have directional biases. Thus efficient signaling should involve the alignment of directional signals with the directional sensors of receivers. Surprisingly little work has focused this critical geometric aspect of animal signaling. We are currently investigating how the behavior of signalers and receivers functions to achieve effective alignment during signaling, using the complex visual courtship displays of Habronattus spiders.

In the jumping spider H. pyrrithrix, male courtship displays showcase colors and patterns to prospective female mates. These aspects of male display are only visible to the female principal eyes, which have a limited field of view directly in front of a female (Fig. 1). When both males and females move freely during male courtship, male displays are regularly aligned with the field of view of the female principal eyes (see video to left). However, when females are tethered, males do a poor job of managing their relative position to maintain alignment. In addition, when tethered females are rotated to look away from male displays, males only infrequently adjust their position to place themselves in front of the female again. This suggests that females play an essential role in effective signal alignment during courtship in this species.

We are expanding on these insights to ask whether male display elements, such as rapid limb movements, influence female body positioning. For example, do the rapid knee jerks of male H. pyrrithrix function to re-capture female attention and elicit female body reorientations that improve signaling alignment?